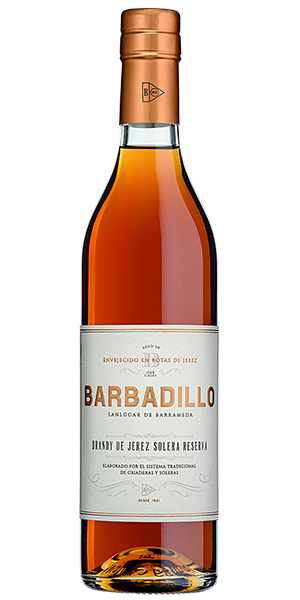 The history of Barbadillo’s Brandies dates back to the company’s origins. In the middle of the nineteenth century they began to age the “holandas” or low-strength spirits that they used for blending their fortified wines or vinos generosos de licor in casks.

To produce Barbadillo’s Solera Reserva Brandy de Jerez, “holandas” or low-strength spirits that originated from the white wine distillation process were carefully selected and these were then left to age in sherry casks that had previously been used for ageing Oloroso wines, and the wonderful microclimate of Sanlúcar de Barrameda has certainly played its part.

Bright and clean with vanilla and nutty notes.

Elegant, warm, flavourful, well-rounded, harmonic and very well-balanced on the palate thanks to its medium ageing for 24 months.

It is perfect as an after dinner digestif served in a balloon glass, mixed with cola, or in a classic and warming brandy coffee.