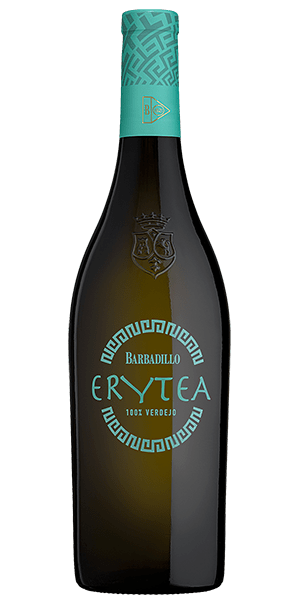 It is said that Cadiz is the oldest city in Western Europe. For almost 3000 years, the 3-island archipelago, that the Greeks referred to as “Gadeiras” has been gradually transforming into what is now known as the Bay of Cadiz. The Island of Ertheia was the most northerly island in this archipelago, and according to Pliny the Elder, from there you could contemplate Hispania from the sea, and perhaps that is why the Phoenicians chose to found Gadir at this very spot, the pearl of the west.

The Erytea wine is essentially a tribute to the multitude of civilizations that arrived from distant lands and made their home in Cadiz, just as the Verdejo grape variety did when it adapted to the white Albariza soils of the Barbadillo vineyards.

Yellow in colour with greenish reflections.

Pleasant, fresh and balanced on the palate.

Ideal with oily fish, this wine goes perfectly with steamed or boiled seafood. Grilled cuttlefish or octopus, with a sprig of parsley or coriander. For the more innovative palates, slightly aged cheese, smoked fish and mussel escabeche and even poultry.